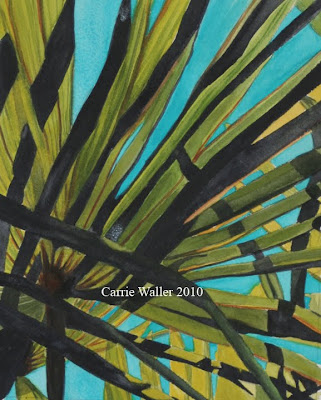 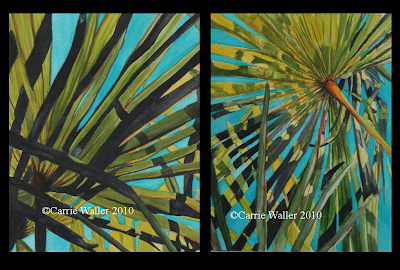 both paintings together watercolors 8 x 10

This week I have the second painting in my Sunny Palms series. I think that last weeks painting is more dynamic, but I do think that this one goes nicely with it. I'm going to do a few more botanical pieces since I'm on a roll. I'm excited about next weeks painting but I am having trouble getting motivated. My goofy master bathroom is looming in the back of my mind. The wallpaper removal is a tedious task. Those are some botanicals that I don't enjoy looking at. Oh well one inch at a time:( 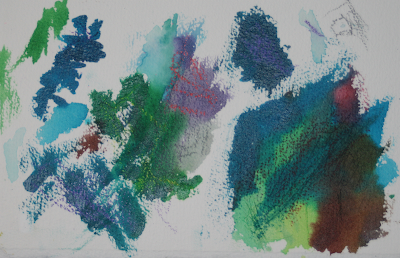 Steven did another painting this week. He has turned a corner and has gone from abstractly putting paint onto paper into trying to make a more realistic painting. I wasn't sure when that would happen. I love the innocence of children. They have no fears they just paint. They aren't worried about the outcome it's more about the process. I knew from teaching art classes that eventually their self consciousness starts coming through in their art. They become more worried about making a picture that looks like something and then eventually they become frustrated that they can't get it to look exactly like it and aware of others giving negative criticism. So when I was teaching I always had a policy that only constructive criticism was allowed. I do think that hearing what others have to say about your work is important but in a positive manner. So back to my point, I found it interesting that Steven is starting to do this at an early age. When I asked him about his painting this week his description took about 3 times longer to explain than I think it did for him to paint.(wonder where he gets that from) Steven says his painting is a tornado-inator (Inspired I believe from Phineas and Ferb his favorite cartoon--2 brothers constantly inventing and building things). So his tornado-inator sucks up all of the tornadoes in the tri-state area (Phineas and Ferb reference). There is also a lizard in his painting? He also discovered crayon resist all on his own--he's so smart:)

We'll see you next Monday!
Posted by Carrie Waller Watercolors at 1:04 PM