A Little of This and That and Bill Clinton

Hi Everyone,
I have not been painting in almost a month, sigh!!!!  But I have had some pretty big excuses, moving, family in town twice since moving, a birthday, working on some projects (I'll tell you about soon) and hanging out with Bill Clinton.  Okay so maybe I'm exaggerating a little about the last part.  My Mom and Step Dad have been in town this week so we made our normal tourist pilgrimage to the Clinton Library on Monday.  We were leisurely making our way to the replica of the oval office when non other than Bill Clinton himself and his security detail were heading to the elevator.  He stopped waved and smiled at us.  We were all dumbstruck and feeling uber touristy with our cameras hanging around our necks and our jaws on the ground as our brains made the rounds of that can't be Bill Clinton, it must be an actor, that couldn't possibly be Bill Clinton.  By the time I had my brain functioning again I grabbed my camera and snapped a shot of him at the elevator.  If only I had gotten the picture of him smiling and waving or had the function to walk to him and shake his hand.  It was just a surreal moment.  Later we were downstairs and Bill and Hillary walked passed us.  Pretty amazing day!!!  I told my Mom she got her monies worth that day:)  We did ask the volunteers at the museum and it was for sure the real Bill and Hillary.  They were in town because a children's library was being named after Hillary and that evening Oscar De La Renta was also going to be at the opening of his exhibit in the Clinton Center.  Who knew Little Rock was so happening:)


The Oscar De La Renta exhibit was small but very interesting, reminded me of the Smithsonian exhibits of the 1st ladies dresses. 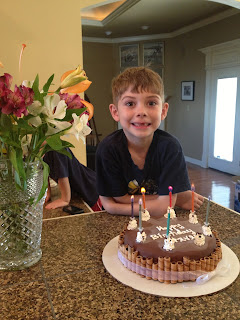 But the big news at our house this week was that Steven turned 7!!!!  I'm not sure how this happened that he is this old, can't believe I have a 1st grader!!!  We had a Haagen Daaz ice cream cake, best ice cream cake ever:)  We also celebrated my Mom's birthday earlier that week June 30 and my birthday is right around the corner on the 21st so there is a lot of cake in the month of July! 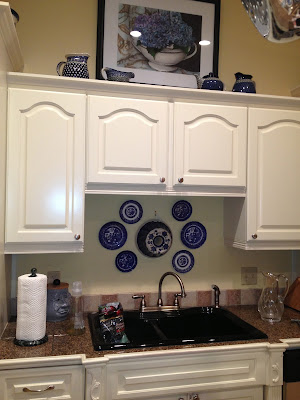 On the home front our house is almost put together.  Still have some lingering boxes in the garage but it is coming together.  I decorated the kitchen with polish pottery and blue willow.  I finally used plates I have had since Germany.  I made my own plate hangers by glueing paperclips on the back of the small plates with E 6000 glue, worked like a charm and no unsightly plate hangers to deal with--didn't have to pay for the glue on hangers either that they sell. 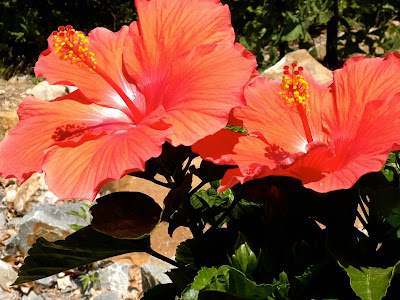 Our hibiscus plants are putting on quite a show for us so I thought I would share:)